The house insurance money is now in the bank, whether it´ll cover all costs is a different matter. That kitchen is going to take some serious joinery work, every time we open the fridge door it creates home made wood confetti.

When there´s a painter in the house assessing what he has to do, other things come to mind, they shouldn´t, but they do. Like for example the bedroom ceiling, it´s needed repainting ever since bright white began to turn a lighter shade of dictator Trump´s skin tone.

I can only think this phenomenon occurs because we always have the patio doors open up there, and the ceiling fan occasionally draws up sand from the tiles on the balcony.

So an optional job, no insurance cover for that but never mind.

Then there´s the vanity sink thingy in the bathroom, lets have it painted bright white too, I´ve never been keen on clotted cream.

ANOTHER optional job, no insurance for that but never mind.

I can only hope when the joiner comes to resurrect the kitchen, we don´t decide to have another one built upstairs.

Hence, the “disaster” damage hasn´t been touched yet, big jobs take time, and the joiner isn´t even in this country for another week… Oh come on, this is Spain, the Brits who work here blend in perfectly. Has to be said, when they finally arrive at the front door ready for action, both Spanish and Brit standards are high.

Meanwhile on the white side of life, we´ve got a new ceiling that matches the others.

Photos taken at night so no need for sunglasses. 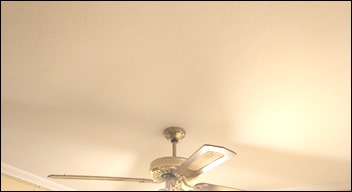 Tell ya what though, I wouldn´t want a Brit actually building a house here, “we don`t have a clue how to build a quake proof property on solid rock” as quoted by a friend with his own building firm in the UK.