RANT MODE: Why did the government decide to re-open some bars??? EVERYWHERE ELSE people adhere to the rules of social distancing, oh but wait, bars appear to be exempt even though strict rules apply. Main one being only bars with terraces can open, (it´s Spain, they´ve all got terraces). So there´s:

Well HA to all that…

There´s three small bars about a kilometre from our house, they´re the ones we used to go to in the before times. Just four days ago they re-opened, and as we drove past this is what they all looked like. Not great photos, it was going dark and there were cars parked outside each one.

Front sides down so we can´t see in. 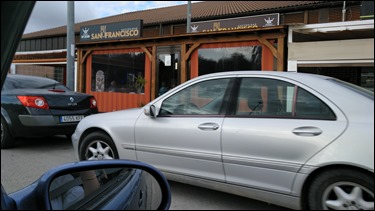 There´s a small Waitrose store round the corner which people use as a car park for the bars, it´s not supposed to be, but guilty as charged we used to do that too.

Now though, it feels like a bit more of a threat when shopping there. A couple of days ago we were on our way in, masks on, wary of hygiene, when a couple we barely know emerged from one of those bars. Pissed as farts, one carrying the other to their car shouted hello to us and ”Why were you not in the pub?” We both stepped back and ignored them. Then as we were putting shopping in the car, another couple came staggering across, OH PLEASE GO AWAY.

After two months of total lockdown with only supermarkets, chemists, and petrol stations open, this area is Covid free, we know that.

All three of us in this household agree, it would be great to go see our close friends at the bar, we´re party people, but the risky news is that friends of friends are travelling to see other friends here. A twenty minute drive away is probably ok, we´re all stuck in the same province. But you never know, and with everyone crammed in tight? Is it worth the risk? No. Call us hermits, I don´t care. The majority of people are doing the same as us for now, our son can´t even go into his office, so there´s a the stark difference between stupidity and reality.

Oh, and I really don´t care if I get banned from the bars names in these photos..