Remember that episode from Fawlty Towers? Well I spoke too soon about our current situation, the bathroom was finished first. Looked beautiful at first glance, but the view from being sat on the toilet offered a whole different perspective.

The grout round the shower base was dirty brown, one of the tiles had no grout there at all. What was at the other side, (white grout) had finger dents in it. Ah well, not too bad you might think, (job redone yesterday) everything else looked ok so ha ha what´s the BIG deal?

Hubby checked things out later and, I kid ye not, there was a puddle of water in the top drawer of the sink unit.. OH MY GOD, IT WAS WATER DAMAGE THAT DEVASTED THE BATHROOM AND KITCHEN IN THE FIRST PLACE, AND NOW THIS?? You just couldn´t make it up if you tried, and the dam thing “only” cost us 550 euros.

When they came today, turned out the NEW plumbing had a joint not connected tightly enough. So they sorted that out, did a bit of something in the kitchen that had to dry out, and buggered off to find some fancy wood coving.

While they were gone we both inspected this 550 euros worth of exclusive engineering and precision, basically the leak has disappeared, but we noticed the gap between one drawer and the other is on a slant. The bottom drawer also sticks out a bit at one side, which means the other side sorta sticks in a bit, thus: 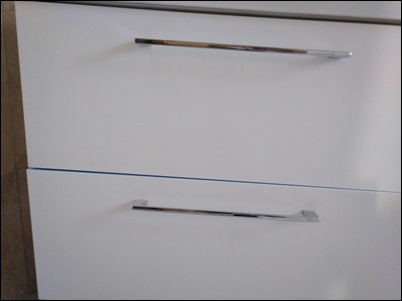 So they´re in the kitchen doing some coving at the moment, and there´s “a top guy who knows his stuff” (re, sink unit) coming here at 7pm. Good luck to him he´s gonna need it, and to think, this building company has a 5 star rating online. I´m not cruel enough to say the company name on here, but feel like doing. Yes ok it was a lot of work, with a five man team each specialising in different jobs, but the one responsible for that sink unit needs a stick (or preferably a waterpipe) up his ass.

Oh wait, here we go, the coving´s going back because it´s been cut the wrong size…